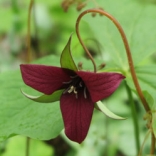 I've heard them called ephemerals. Indeed, they tend to be small, bright, and short-lived. Aside from providing us with a pop of color in the still-brown landscape, spring ephemerals provide sustenance to early insects such as queen bumblebees. Ephemerals sprout in unlikely places, peaking out from beneath leaf litter, between tree roots, along streamsides, and in vernal pools.

A visit to the Rhode Island Water Lady

In the middle of a dry July, wouldn't it be nice to have some rain barrels brimming with H2O? A visit to the Rhode Island Water Lady can make it happen. 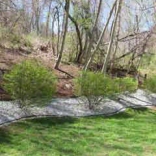 I've talked with people who hesitate to go outside, worried about getting a tick bite. Researchers from the Connecticut Agricultural Experiment Station (CAES) have investigated the problem for years. Here's my 2014 interview with Dr.

Why we plant winterberries

On April 6, 2014, these cedar waxwings were pecking berries left over from the 2013 growing season--our brilliant red native winterberries (Ilex verticillata). The berries are said to be too hard and sour for the birds until about this time of year, late winter, early spring--when most food sources are scarce. It's just one more reason to plant native and let nature do its work.

They're so small, but not so simple. Seeds seem as though they should be easy to buy, but there is actually a lot to know.

They look so innocent and inviting, those little seed packets on retail counters in January, February, and March.

Got snow? As I write, we are near white-out. But I am thinking of seedlings. There are the traditional late winter seedlings, yes, but there are also some outdoor adventures to be had in late winter growing. That's because, as our days get longer and brighter, it's actually possible to begin the planting process.

The soft paws of pussy willow, a small native tree, go hand in hand with late February in the southern New England town where I live. But apparently we'll have to stick to town and city streets to find Salix discolor (its other name), because in a number of places, they are considered almost gone from the wild landscape.

Four-season food growing in the northeastern US? It's a topic that pops into gardening and farming headlines more and more. The topic has long been of interest to me; I've practiced season extension and cold-cellaring for years. But full production in winter is a skill unto itself.

Five Gifts for Gardeners, Locally Made

If you're scratching your head for a unique gift for the gardener in your life (even if that's yourself), how about going local?