Where Do the Wild Things Grow? 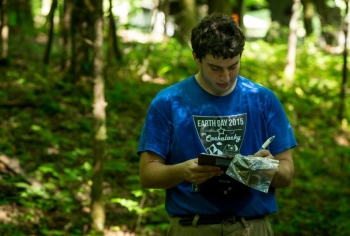 We know that native plants didn’t begin their evolution in the black plastic pots we see at garden centers. But where are the native plants in nature? How do we know if they are thriving or disappearing or just holding their own?

Enter the Native Plant Trust, an organization known as the New England Wildflower Society until a few years ago. The organization was founded in 1900 with a mission of conserving New England’s native plants. It was the first organization of its kind in the U.S.

By 1990, the Framingham, Massachusetts organization’s leaders became alarmed at the number of plants that seemed to be disappearing from places where historical records showed they’d once been present. Recognizing there were too few professional plant scientists tracking and updating the status of these plants, the trust convened its first class of 15 citizen-science plant hunters in 1993.

“Volunteers went in search of 45 rare plant populations that year,” says Micah Jasny, botanical manager of the New England Plant Conservation Program (NEPCoP) at Native Plant Trust.  “A few of the searches were based on plant records as much as 100 years old...A lot had changed. But they found 35 species out of 45.”

“We cast a wide net to find anyone who’s interested in wild plant conservation,” says Jasny. “The volunteers usually have some plant knowledge, but they certainly don’t need degrees in plant science to participate.” (Reach Micah Jasny at mjasny@nativeplanttrust.org.)

Volunteers attend spring training sessions, where they learn how to use the program’s plant-finding protocols. They learn how to track plants and report their findings and how to adhere to the program’s meticulous permission system for conducting searches on private as well as public land. Volunteers commit in writing to keeping locations private. Only trained volunteers participate in the excursions.

I corresponded with several PCVs, each of whom referenced the element of adventure in their plant hunting. Caroline Driscoll of New London says the plant-hunting process is “more like a scavenger hunt than a walk in the woods.”