One Simple Thing: Turn Down the Lights 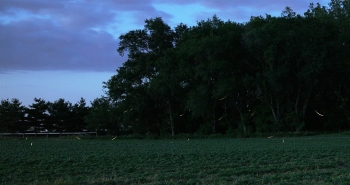 When it comes to helping pollinators and wildlife, you don’t have to buy plants or dig a garden. Anyone can help when they adopt some of the ideas put forward by the International Dark-Sky Association (IDA). Better yet, we can all petition our cities and towns to do the same. You’ll be helping all wildlife, not just bees and butterflies.

I first learned about the IDA organization when I researched the decline of fireflies in 2020. (Where Did All the Fireflies Go?) Entomologists discovered that night lighting is strongly related to the dwindling numbers of fireflies.

How many other species are affected?

According to IDA data,100 percent of bats are nocturnal, as are 95 percent of amphibians, 65 percent of mammals, and 65 percent of invertebrates. Invertebrates include all insects, including pollinators. The category also includes spiders, worms, jellyfishes, mollusks, and more. Also, many birds hunt at night or migrate seasonally at night. Many owls are entirely dependent on night hunting.

“One study, for instance, shows how moths and other night-fliers become ‘trapped’ in orbit around night lights, where they often die of exhaustion or are eaten by a predator before morning,” he says. Moths are important pollinators. “Another study points out the additional stress place on amphibians,” he says.

The solution? “Replace your security light bulbs with yellow or amber LED lamps, which insects aren’t attracted to,” says Sirch. “Also, replace your fixtures with motion sensors so they won’t stay on all night.”

If the idea of turning down the outdoor lights raises concerns for personal safety, you might be surprised to learn that more light is not always better. IDA provides a wealth of resources on all-things-lighting, including personal safety, approval for compliant lighting products, guides to retailers, and best practices.

See the complete article, and find lots of resources: Turn Down the Lights, at Zip06/TheDay.

Also see Where Did All the Fireflies Go?