Deer, Landscape Plants, and the Winter of 2018 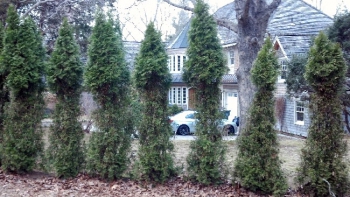 Will landscape plants see lots of deer damage in the winter of 2018? Could be . . . and here's a reason: The preceding summer didn't produce a large crop of acorns and nuts from oak and beech trees. In other words, 2017 wasn't a "mast year."

During mast years, trees supercharge the output of acorns and nuts—apparently by agreement among themselves. It’s an unpredictable phenomenon that occurs in three- to five-year cycles. The trees seem to communicate among their kind, oak to oak and beech to beech. To make it even more mysterious,  masting is regional. It can be a mast year in one part of the state and not another.

Masting appears to be part of some trees' survival strategies.

Mast years are good for landscape plants, because the presence of acorns and nuts discourages deer browsing—at least until the mast runs out.

According to Scott Williams, Ph.D., a wildlife biologist at the Connecticut Agricultural Experiment Station in New Haven, “Connecticut’s deer population is down from 10 years ago, when it reached unsustainable density.”

Williams includes roadkill, several winters with heavy snow loads during the past decade, and relaxed hunting regulations were among the reduction factors.

But he says that while there are fewer deer overall, the feeding pressure on suburban landscape plants remains.

For a few ideas on coping with deer in winter, see my latest article at Zip06/TheDay or download the story below.